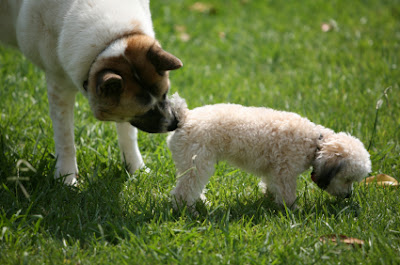 Have you ever followed a man or women down the bread aisle of the supermarket because their scent was so intoxicating?  Maybe you just wanted to know what perfume or cologne their wearing (or maybe more).  Maybe the pleasant scent reminds you of an old love.  The song "Cross My Mind" by Jill Scott says it perfectly:

"I was just thinking about you
Wondering if you wear the same cologne
Smelled good -- On you
Had the next boyfriend of mine try the same kind
But it stunk on him though."
The same scent doesn't smell the same on everyone.  Have you ever held on tight to a pillow and breathed in the scent of your spouse after they left?  Is it Pheromones or the mixture of their daily grooming habits?  I know I get weak in the knees after he puts on my Bajan Blue Water Whipped Body Butter after the shower, but I beg for mercy for him to put back on his shoes after work.  :-)

Pheromones have been proven as a sexual attraction in animals but the debate in humans continues.  Personally I don't think the natural odor of a man or women can stimulate me positivity physically, but who knows what it does chemically.  I think if they worked that well people like me wouldn't be in business.  On the other hand, have you ever had the misfortune of getting a whiff of someone who drank so much and the alcohol is literally emanating from their pores?  I'm wondering if the same holds true if one eats a generous fruit diet if one starts to smell quite fruity!   What are your thoughts?

For those who want some pheromone assistance, we have a wide selection of perfume and cologne body oils from designer fragrances to the old favorites.   Take a look for yourself or your sweetheart because sometimes the scent of a man or a woman can need some help.

Email ThisBlogThis!Share to TwitterShare to FacebookShare to Pinterest
Labels: scents