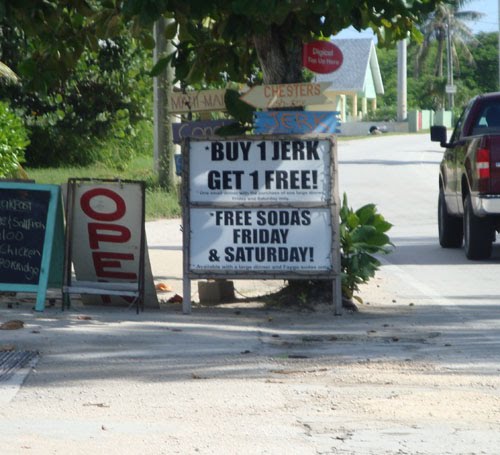 I took this picture on a road in the Cayman Islands and immediately thought Jay Leno would get a laugh out of this.

The picture is actually an advertising sign from a Jerk Chicken shack and after passing it several times that week we took them up on it.  It was delicious!  If you don't know what Jerk is it's a sweet and spicy rub originated in the Caribbean (particularly Jamaica). 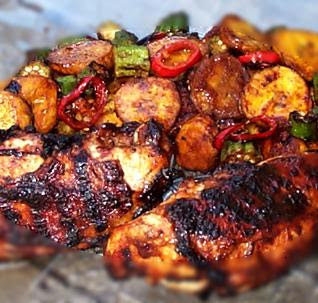 Jerk Chicken is the most popular but the rub can be used on any meat, poultry, fish or tofu.  There is also a technique to cooking the jerk chicken that I have yet to perfect.


I found this tutorial and recipe from JamaicaTravelandCulture.com


I'm of the take out generation and have never heard of Scotch bonnet peppers until I read this recipe.  Okay, you see the 3rd to last step where they say "ideally BBQ over a rack of pimento wood".....I think this is the key to lip-smacking jerk chicken.   Wondering where I would find pimento wood in Long Island :-)

Nikki thank you so much for the recipe I have been looking for a good one for a long time..wish we had a place like that here.

I am following your blog!

That's too funny! I'll have to try the recipe. I visited Grand Cayman Island about five years ago and haven't been to the Caribbean since :(

Thanks for sharing this recipe. Love Jerk Chicken, My favorite favorite restaurant that served this had a fire a couple of years back and has not reopened. Miss it dearly.